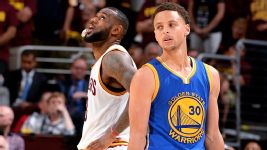 The series averaged 19.94 million viewers on ABC, breaking the post-Jordan Finals record of an average of 18.9 million viewers that was garnered by the 2001 NBA Finals between the Los Angeles Lakers and the Philadelphia 76ers.

The 2015 matchup featuring Warriors guard Stephen Curry and Cavs forward LeBron James was boosted by the viewership of Tuesday night’s Game 6 series finale, which scored 23,254,000 viewers, according to Nielsen. It was the most watched NBA Finals game since Game 7 of the 2013 Finals between the Miami Heat and the San Antonio Spurs.